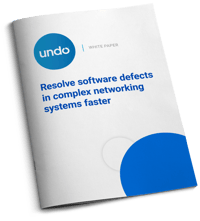 In an increasingly complex, virtualized and software-driven environment, networking solution providers are more exposed than ever.

Unfortunately, traditional methods of testing and debugging are no longer sufficient. Some of the world's largest networking providers in Silicon Valley have adopted a new capability to accelerate defect resolution.

In this white paper,  you will learn: